← back to
Versatile Records
Get fresh music recommendations delivered to your inbox every Friday.
We've updated our Terms of Use. You can review the changes here. 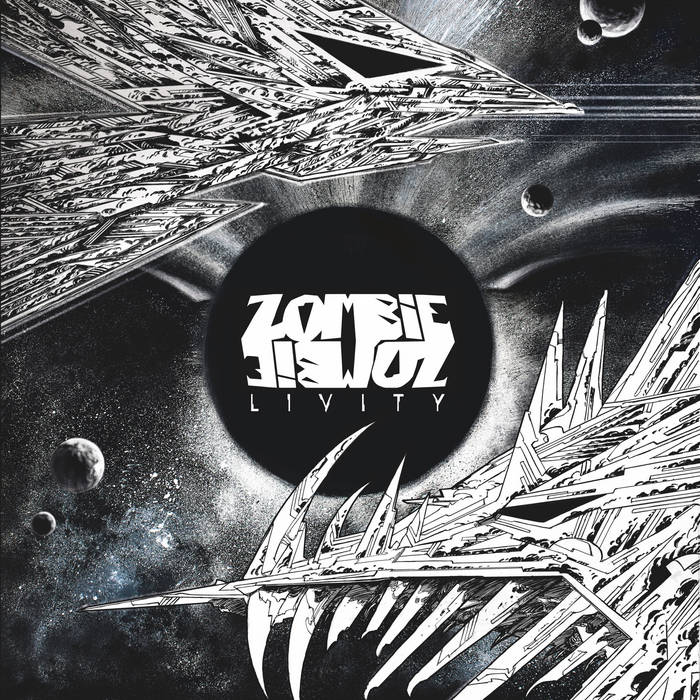 Thibaut Devigne Zombie Zombie delivers an album full of synthetizers, oscillating between abstract ambiant and kraut. It is quite rich when one decides to dive in it, but is never obstructing with anything, making it also perfect background music. Favorite track: Ils Existent.

Nik Havert Zombie Zombie have returned with an album full of sci-fi dance music and experimental tracks. It's a fine piece of work.

UNLIMITED FREAKOUT IS LOVE. Carpenter,Goblin,Morricone and more inform the musical melange that is Zombie Zombie's Livity even then, I'm underselling it.

It's already been 5 years since the last Zombie Zombie album 'Rituels d’un Nouveau Monde', after which the group explored other territories by signing 2 film scores, namely 'Loubia Hamra' by Narimane Mari and 'Irréprochable' by Sébastien Marnier, as well as creating the music accompanying a contemporary circus show called 'Slow Futur' created by Martin Palisse and Elsa Guérin. Wouldn't these beautiful parentheses make you want to return to the sources? After 10 years at
Versatile Records, 2017 also marks the decade anniversary of the release of their first album 'A Land for Renegades' in 2007, at the time considered to be one of the 10 best albums of the year according to Rough Trade.

'Livity' - Zombie Zombie's latest opus seems to plunge us deep into science fiction, with a cover designed by the mythic cartoonist Philippe Druillet, who is also the founder of the cult Métal Hurlant comic series. The title of the album is somewhat misleading, as one could mistakenly think of a certain dub record made at
the famous Island Records Compass Point studio in the Bahamas. For the uninitiated 'Livity' or 'Life force' is actually a Rastafarian spiritual concept based on the idea that an energy exists within, and flows through, all people and all living things. The record was recorded last winter in Paris, in a very short
time frame. 7 tracks played live in 7 days, by Etienne Jaumet (synthesizers / rhythm box / metallophone / sax), Cosmic Neman (drums / vocals / sound effects), and Dr. Schonberg (percussion / electronics / trumpet), recorded at the Red Bull Studios by Thibaut Javoy and Jerome Caron, 2 very competent engineers. To keep it in the family, the album was then mixed by another member of the Versatile stable, the mysterious and legendary DJ/producer I:Cube, done in the label's Victor Studio.

On this album the principles that are dear to the group rest being respected, still as far away as always from the standards of 'radio play', A living kind of music, composed of long instrumental moments recorded with analog synthesizers and drum machines, accompanied by drums and percussion. But
I:Cube's touch may bring the unique energy that one may find at Zombie Zombie's concerts; on certain cuts like title track 'Livity' that the group recorded in Laos, a wild combination of 808 kick drums and bewitching jungle sounds that sound quite unlike anything else out there, and especially on 'Hippocampe', which gives the impression of hearing an old school hip hop rhythm with the power of a metal band who have replaced their guitars with an army of synthesizers: we recommend you listen to this particular track in a convertible while speeding down the highway.

As with all of Zombie Zombie's music the cinematic component is still strong, on titles like 'Ils existent..' 'Acera' which was originally composed for ciné-concerts accompanying the films of Jean Painlevé et Maurice Pialat. The energy of the beginning is still very present, as is - of course - the kraut inspiration. But it's also an album that takes new directions and sonic risks, like on “Looose”, which brings to mind the Art Ensemble of Chicago, or the groove of James Chance in New York in the early 1980's, featuring the free sax solos of Etienne Jaumet and Dr. Schonberg on the trumpet. The group also offers some slower and calmer titles, like 'Heavy Meditation' as well as exploring more experimental tracks in the line of French 70's groups such as Lard Free or Richard Pinhas, for example on the bonus track 'Black Moon'.

(Versatile Records, to be released Oct 2017)

Zombie Zombie, the French trio, featuring Etienne Jaumet on analog synths, Cosmic Neman and Doc Schonberg, both on drums and percussion, is back

Bandcamp Daily  your guide to the world of Bandcamp

Mille Petrozza stops by to talk about the new Kreator album, plus music by Trauma Bond